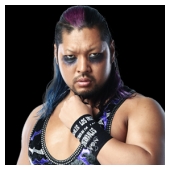 Carrying his signature scythe, a sense of dread always follows this mysterious wrestler into the ring. Making his NJPW debut as Tetsuya Naitoâ€™s â€œparejaâ€ (buddy) in October 2015, EVIL surprised many with his speed in the ring, belying his powerful frame. He is a 2016 NEVER Openweight title holder. His eponymous signature move is a powerful takedown aimed at his opponentâ€™s head. EVIL is also proficient in painful submissions, forcing even the strongest to tap out in excruciating pain.