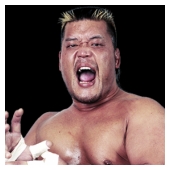 Tenzan is a veteran of the ring, with countless hard fought matches to his name. He debuted for New Japan in January of 1991 and quickly displayed a powerful fighting style paired with skilled techniques. He quickly rose to prominence, winning the IWGP Heavyweight title 4 times, the G1 CLIMAX 3 times and the IWGP Tag Team title a staggering 11 times. Tenzan has famously featured large horns as part of his costumes. Together with his fellow 3rd generation team partner Satoshi Kojima, the duo have dominated as the legendary TenCozy.