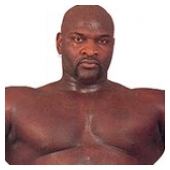 Tony Morris, better known by his ring name Ahmed Johnson, is an American retired professional wrestler. He is best known for his stint in the World Wrestling Federation, where he was a one time WWF Intercontinental Champion, and the first African American to ever win a singles championship in the company. He is also the first winner of the company's Kuwait Cup. Get official Beast Mode merchandise here!