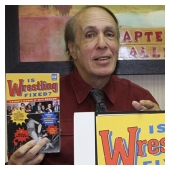 Bill Apter is a legendary pro wrestling photographer and journalist. He is best known as an editorial staff member and photographer for several magazines during the 1970s, 80s and 90s, notably Pro Wrestling Illustrated. Apter was so closely associated with these magazines that they were often known as "The Apter Mags."