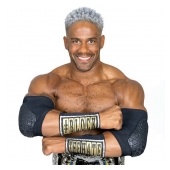 Fred Rosser "Mr. No Days Off" - better known by his former WWE ring name Darren Young - is a WWE Veteran Superstar and a relentless advocate for the LBGTQ community. In an interview on August 2013, Young discussed being gay, making him the first WWE wrestler to come out publicly while still signed with the company. Fred Rosser now wrestles in the independent circuit, while still serving as an advocate for the LGBTQ community.