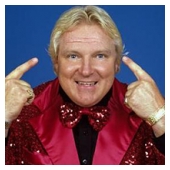 Bobby "The Brain" Heenan is a former American professional wrestling manager, wrestler and color commentator. He is best known for his time in the AWA, WCW and WWF where he managed some of the biggest names in Sports Entertainment. He was inducted to the WWE Hall of Fame in 2004. WWE has described Heenan as "one of sports-entertainment's best loved legends"