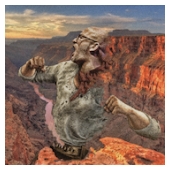 Internationally respected and lauded comedian's comedian and wrestling fan's wrestling fan. Host of the critically acclaimed worldwide podcast, "Dumb White Guy" and the surprisingly listened to "Comedians Watch Wrestling" He is also the co-host of "Brendon Burns and Colt Cabana do Comedy and Commentary to Bad Wrestling Matches" during Edinburgh Festival Fringe each year and around Europe. But that's based on Cabana and Marty Derosa's idea, so it's swings and roundabouts innit?