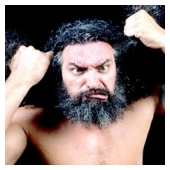 Frank Donald Goodish (June 18, 1946 â€“ July 17, 1988) was an American professional wrestler who earned his greatest fame under the names King Kong Brody and Bruiser Brody. Goodish was an All-State football and basketball player at Warren High School, Michigan, and played football at West Texas A&M University (then known as West Texas State) and with the Washington Redskins in the NFL. As a wrestler, he helped innovate the "brawling" style and was infamous for his wild and legitimately uncooperative demeanor.