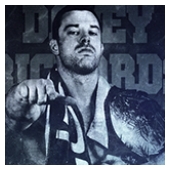 Richards is currently under contract with Ring of Honor, where he is the current ROH World Champion but also wrestles for several companies on the independent circuit, including Pro Wrestling Guerrilla (PWG) and Squared Circle Wrestling (2CW). Aside from his work in the United States, Richards has also worked internationally, most notably in Pro Wrestling Noah, through ROHâ€™s involvement in the Global Professional Wrestling Alliance, a global organization of cooperative promotions that allow their competitors to travel abroad to other companies, and currently New Japan Pro Wrestling.