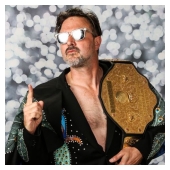 David Arquette is an actor, writer, director, producer, and former WCW Heavyweight Champion. A fourth generation actor from one of the most prestigious acting families in Hollywood, Arquette was discovered in 1997 at Sundance for his role in JOHNS. Since that time, he has acted in dozens of feature films, including the SCREAM films, HAMLET 2, THE GREY ZONE, WILD BILL, STEALING SINATRA, and NEVER BEEN KISSED.