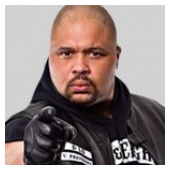 Dlo Brown is a world-renowned professional wrestler who is best known for being a member of the Nation of Domination during the WWE Attitude Era. After splitting from the Nation, Dlo enjoyed a successful singles career as well. It was during this time he made history by becoming the first ever Eurocontinental Champion. Dlo has worked for nearly every major wrestling organization and is currently competing in All Japan Pro Wrestling as a member of Dark Kingdom.