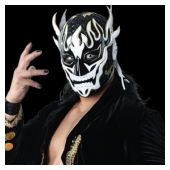 The mysterious masked man with a guitar in hand. Debuting for New Japan in January 2014, El Desperado displayed promise with a strong Lucha style. After competing in the 2014 Best of Super Juniors tournament, he joined Suzuki-gun and was reborn as a formidable member of the heel faction. Upon following Suzuki-gun into their invasion of the NOAH wrestling promotion in 2015, he was crowned GHC Junior Heavyweight Tag Team Champion with his partner Taka Michinoku. With his signature move, Guitarra de Angel, this deadly musician slams his opponent into the mat with perfected force.