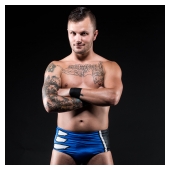 Hailing from Rochester, New York... Eric Emanon, the Founder of the Indy Card Mafia, the "Punk Rock Supernova", uses his strikes, strength and flying abilities to pick his foes apart. Wrestling professionally since 2008, the charismatic Emanon has shown that sometimes the bark is just as bad as the bite. Versatile on the mic as well, Eric can verbally eviscerate most, before the bell rings...and back it up when he has to.