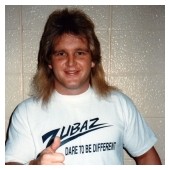 Bobby Fulton has wrestled for nearly 40 years, he has wrestled in WCW, WCCW, WWF/WWE, Mid South, All Japan, Stampede Wrestling, Jim Crockett Promotions and many more. Bobby teamed with Tommy Rogers to comprise the Fantastics tag team. They held 16 tag team championships. Some of the awards they received are: 5-star Match (1986) and Feud of the Year (1988). They would have feuds in different territories with both versions of The Midnight Express and The Sheepherders.