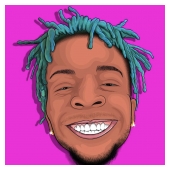 25 year old Lio, Has quickly climbed the ranks in the world of wrestling with 6 years of experience and being signed to WWE at the age of 22 years old. Lio is the 1st person in the 16 year history to win back to back years for MCWs 2015 and 2016 Shane Shamrock Cup tournament. He is also a 2x CZW Wired champion. A Former CZW Heavyweight Champion. The 2016 ROH Top Prospect Tournament Champion and Former WWE Cruiseright Champion. Ladies and gentlemen , "The Man Of The Hour" Lio !