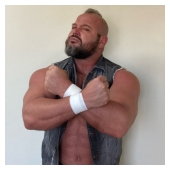 Hartley Jackson is an Australian professional wrestler fighting in Japan. From 2017-2019, he served as an official coach and producer for WWE NXT at the WWE Performance Center. In 2020 he returned as an active wrestler in Japan, with his best years most definitely behind him... or ARE they? #madeoftherightstuff