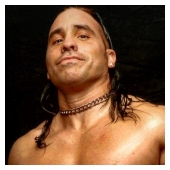 Welcome to professional wrestlings only killerweight,"The Heartkiller" Chris Wylde's store!! Wylde has been tearing it up all over the U.S and Germany for 10 years. He has been in 2 ECWA Super 8 tournaments (2010,2013) and has been featured in PWI magazine on multiple occasions, as well as been a nominee for most improved wrestler in 2011. Wylde has also been on WWE Monday Night Raw!!