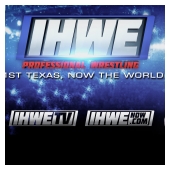 Iconic Heroes of Wrestling Excellence, founded in 1998, is the premier promotion in Fort Worth, Texas. From Insane Hardcore to Iconic Heroes, From Taboo to Tradition. Stan Hansen & Jim Cornette have endorsed IHWE, Johnny Gargano, Leva Bates, Kyle O'Reilly have all come through, Necro Butcher began his run at IHWE, and so many others have passed through. IHWE can be seen across the globe via our app which can be downloaded on IOS & Android. First Texas now the world.