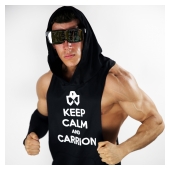 Reality TELEVISION superstar, Jason "KEEP Calm & Carrion. Although he's known for starring in the"Married At First Sight" franchise, Jason doesn't let it go to his head. Wrestling for close to 7 years, Jason's in ring talent speak for itself. At the end of the day its one more for the highlight reel & one more "I told you so" from, Jason "Keep Calm" Carrion!