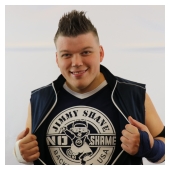 "No Shame" Jimmy Shane is one of the most entertaining performers in the Midwest independent wrestling scene. Whether he's dancing, singing, or even occasionally wrestling he's always out to prove that he's a #WINNER. 2x OCW Heavyweight Champion, the longest reigning OCW Ohio Heritage Champion, 2015 DBi Champion, and self proclaimed Dance-Off World Champion. And there's no shame in that!