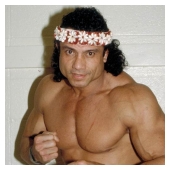 Jimmy "Superfly" Snuka is a Fijian professional wrestler and a WWE legend. Originally from the Fiji Islands, Snuka wrestled for several promotions in the 1970s and 1980s. He is best known for his time in the World Wrestling Federation (WWF) in the early to mid-1980s and is credited with introducing the high-flyer style of wrestling to the WWF. He has also wrestled in Eastern Championship Wrestling and American Wrestling Association He was inducted into the WWE Hall of Fame in 1996.