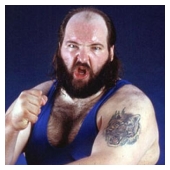 John Tenta, best known to wrestling fans as Earthquake, was born on June 22, 1963, in British Columbia. As a teenager, he received a wrestling scholarship to Louisiana State University. In homage to his school, he got a tattoo of a tiger on his left arm. That tattoo would need to be covered up when he entered the world of sumo wrestling. He retired from that sport in 1986 and began wrestling for All Japan Wrestling in 1987 after being trained by Giant Baba.