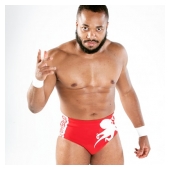 Jonathan Gresham first appeared on â€œRing of Honor Wrestlingâ€ in the 2011 Top Prospect Tournament, and since then he has wrestled in 14 countries and four continents, proving to be one of the premier technical wrestlers in the world. Gresham is using the â€œPureâ€ wrestling style to rise up the ranks, including a star-making performance against Jay Lethal at Honor Reigns Supreme in February 2018.