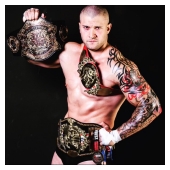 A Hybrid-Style Pankration Pro Wrestler; Killer Kross has acquired himself a ruthless reputation for being the man that talks the talk and proceeds to walk the walk on people's careers. Known by many monikers such as The Tollman, The Most Vicious Shooter In Professional Wresting and The People's Executioner- His rise to stardom has occurred through FSW- being Undefeated for over two years and has been one the longest reigning and defending World Heavyweight Champions in PW history. Former 2-time WWE NXT Champion and was undefeated for over an entire year in NXT.