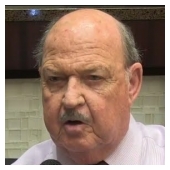 Mean Gene Okerlund was a semi-retired American professional wrestling interviewer and announcer. He is best known for his work in the World Wrestling Federation and World Championship Wrestling. He was inducted into the WWE Hall of Fame in 2006 by Hulk Hogan. He is currently signed to lifetime employment with WWE and works for promotional programs mostly for WWE Classics On Demand programming and occasionally makes special appearances on TV shows. He is also the co-host of Vintage Collection. RIP.