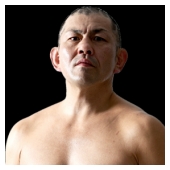 The boss of Suzuki-gun, Minoru Suzuki has never been known to care about the rules. Debuting in 1988 for NJPW, he later competed in many MMA promotions including the second iteration of the UFW, the Fujiwara-gumi and Pancrase. After an extensive career as a top fighter he returned to NJPW in 2003 to wreak havoc. His signature swirl-cut hairstyle reflects the ferocity of his fighting style. Suzuki is known to finish off opponents with the Gotch-style Piledriver, an homage to the â€œGod of Wrestlingâ€ Karl Gotch.