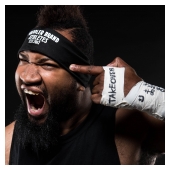 "The Project" Thomas Brewington hails from Anaheim, California and fighting out of Rochester, New York. Vice President and co-founder of the Indy Card Mafia tag-team, Brewington utilizes an array of strikes and submission manuevers to dismantle opponents..along with his painted up variants which he dubs "Devil Brewington". Brewington is also the founder of Project Wrestling, an organization designed to bring back honor and prestige to independent wrestling.