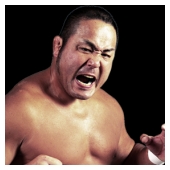 Nicknamed â€œYajinâ€, or â€œwild guyâ€, Nakanishi embodies the unbridled power of Japanese pro wrestlingâ€™s â€œ3rd generationâ€ of fighters. After wrestling for his country in the Barcelona Olympics, he joined NJPW in 1992, and has seen success both in Japan and abroad. Nakanishi favors a hard hitting strong-style, employing moves like the Argentine backbreaker to wear down his opponents. After suffering a spinal cord injury in 2011, he persevered and made a full recovery, returning to the ring the following year. Nakanishi is famous for his appetite, and frequently shares photos of his gargantuan break