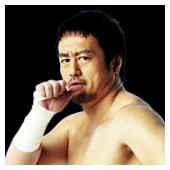 Notoriously eccentric, what Taguchi may lack in raw strength he more than makes up for in presence and ability. Upon debuting in February 2002 in New Japan, he showed a knack for both submissions and aerial assaults. Together with Prince Devitt as the tag team Apollo 55, he held the IWGP Jr. Heavyweight Tag Team belt. In September of 2014 Taguchi took a turn for the even stranger, constantly uttering catch phrases like â€œOh My & Garfunkel!â€ Fully embracing his â€œImmortal Funky Weaponâ€ nickname, he incorporates goofy but effective hip thrusts in the ring.