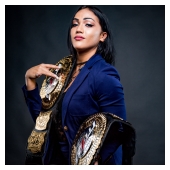 Salina de La Renta is the founder of Promociones Dorado, which acts as a pipeline to the stars of Latin America for sports leagues, TV and film in the United States and abroad. A powerful player in sports and entertainment in Latin America, Salina de la Renta is one of todays most sophisticated and driven entrepreneurs. Catch her on National TV on BeIN Sports USA, 8PM on Major League Wrestling and SWE FURY TV on ABC Texas.