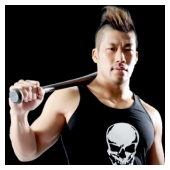 Debuting in All Japan Pro Wrestling in 2007, SANADA is a powerful asset to Los Ingobernables de Japon. He moved to WRESTLE-1 in 2013, and later became the first Japanese TNA X Division champion. After a period working the independent circuit, he made his NJPW debut in April 2016. SANADA prefers to intimidate the opposition by entering the ring with a skull mask and black baseball bat. Once the starting bell rings, expect him to rain powerful drop kicks and body presses from above.