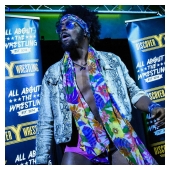 A journeyman of the US of A, UK, Japan, and anywhere in between, Suge D has been entertaining no matter the language or country code for years. Blending the showmanship of James Brown with the ring savvy of a World of Sport catch artist, his flamboyant style has resonated with audiences and caused losses for opponents who underestimate his flavor! His face may also be familiar under another identity, having recently been nicknamed "Pineapple Pete" via his various appearances on AEW television!