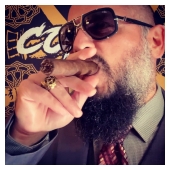 Josef Samael, (Formally Known as the Almighty Sheik) is the leader of CONTRA UNIT. He is a former NWA World Heavyweight Champion, a former Zero-1 Japan World Heavyweight Champion, a current MLW Superstar, the Master of the Psychic Fireball, and the Inventor of Sports Terrorism. A decorated 20-year + veteran of the sport, Josef Samael has dominated every continent he’s competed on and now he looks to defeat all in his path in Major League Wrestling. #HAILCONTRA