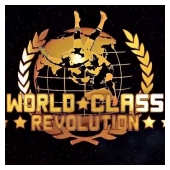 World Class Revolution, based out of Ardmore, Oklahoma, is one of the largest wrestling entertainment properties in the South, creating hours of original content annually across television and other digital platforms. World Class has produced live events in Oklahoma, Texas, Kansas, Arkansas, and Louisiana. The World Class Championships have been defended in the United States including Hawaii, Japan, the United Kingdom, and Israel. World Class are also the creators of both OklaCon and OklaMania.