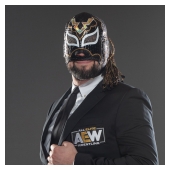 Excalibur, co-founder of Pro Wrestling Guerrilla, used to be a professional wrestler and got beat up a lot. An awful lot. He has since retired from in-ring action and now serves as Pro Wrestling Guerrilla's Liaison to the Board of Directors, as well as the company's Lead Play-By-Play Commentator, where he tries to fit in as many esoteric references as humanly possible. One time, Excalibur beat AJ Styles (in Mario Kart DS). Another time he met Dennis Rodman (who was a little weird). One other time he met Ronda Rousey (who was super nice).