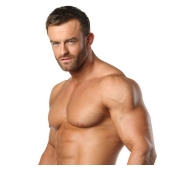 Nick "Magnus" Aldis first rose to notoriety as trash-talking Oblivion on Gladiators in the UK. After that he joined TNA, forming The British Invasion with Doug Williams, winning IWGP and TNA Tag Titles. He teamed with Samoa Joe and won the GHC and TNA Tag Titles, before defeating Jeff Hardy to become the 1st British World Champion. He is one of 2 men that hold a submission victory over Sting. Nick is the current reigning NWA World's Heavyweight Champion.