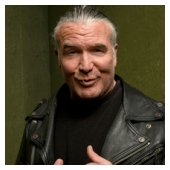 Scott Hall is an retired American professional wrestler. He is best known for his tenures with the World Wrestling Federation (WWF, now WWE) under the ring name Razor Ramon, and with World Championship Wrestling (WCW) under his real name. He is notable for being a founding member of the New World Order (nWo). On April 5, 2014, Hall (as Razor Ramon) was inducted into the WWE Hall of Fame.