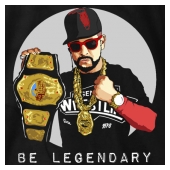 This is official merchandise owned and operated by agent, actor, entrepreneur, music mogul, real estate tycoon, inventor and wrestling personality Uncle Louie. Louis Gregory, publicly known as Uncle Louie was the president and co-founder of The Legends of Wrestling and is part of Team Goldberg. He enlisted in the US Military at a young age and was a founding member of the Department of Homeland Security. He was a recurring co-star on ABC's hit sitcom The Goldbergs and was recently cast by Disney