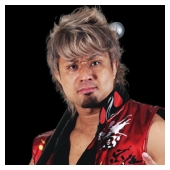 A CHAOS fan favorite who has seen sudden success as a singles wrestler in 2016. YOSHI-HASHI trained in Mexico starting in May 2010, and returned to NJPW to join CHAOS in January 2012. Although he failed to initially find clear successes, his popularity slowly grew due to his unique personality and showmanship outside the ring. With this momentum he entered the G1 CLIMAX in 2016 and debuted his new finisher, Karma. It was there that he defeated Kenny Omega and achieved one of his crowning glories.